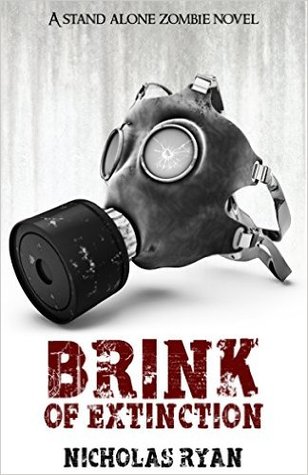 If you’re after a fast paced read that offers more than your usual zombie novel does, then Nicholas Ryan’s book, Brink of Extinction, might be just the thing you are looking for. Brink of Extinction is set in America post the zombie apocalypse and aspects of it reminded me of the films Mad Max mixed with The Road.

Ryan’s opening scene will grab your attention. It is not just a fast paced action sequence, it is also brutally violent and it serves to introduce the novel’s arch villain, Gideon Silver. I don’t object to violence in literature, in fact I love a good action novel, however I felt that the length of this scene could have been shortened by a third or half and still have had the same effect. I could predict where this scene was heading, so I was not shocked. However, what served to show Gideon’s depravity ended up becoming gratuitous and the only reason I can think for the length of this scene was to create shock value in some readers. Fortunately, this is the only scene where I felt this way.

The other main characters in the novel are “The Man” and his son, “The Boy”. The choice of leaving these two characters unnamed is an interesting one. For some writers this choice would run the risk of alienating the reader from the characters; often we need a name to help us relate to the character in more depth. Ryan manages to avoid this and the reader becomes quite involved in the lives of these two characters. The choice would seem to reflect the fact that both the man and the boy are in essence lost souls, like so many after this war, or for that matter any war. The father is forcing the boy on a journey, a kind of pilgrimage, with him in the hope that the destination will restore their relationship. It does far more than that. By the end of the book you will understand and fully appreciate the significance of leaving “The Man” unnamed – I thought it was a very nice touch – though maybe I’m sentimental about these things. All I will say is that the man represents so many soldiers. I think that leaving them unnamed adds to the cyclical nature of certain aspects of the story.

The characterisation of Gideon Silver is a shallow one – he is a caricature. We never see beyond the scarred, depraved, violent, uber villain. However, he serves his purpose well within the narrative as he is. The reader’s main focus should be, and is, on the father-son relationship and all that is revealed about them and the society in which they live.

Their journey takes them to the Museum of the Apocalypse. This segment really makes up the guts of the novel. Each section of the museum documents the zombie apocalypse and the war against them. I was worried that these sections would become as overindulgent in gore and gruesome detail as I had felt opening scene did. However, the timing of the shift from one exhibit to the other was well done and Ryan struck a delicate balance here between recounting brutal action in some sections and poignancy in others. Only once did the cynic in me rear its head and cry, “Oh the pathos!”

Zombies aside, aspects of this museum and the emotions it invoked in the characters reminded me of my visits to various war memorials — in particular sections of the Australian War Memorial. So despite its setting, this felt very real.

Of course, the man and the boy’s journey has brought them to the attention of Gideon Silver and they have become entangled in his schemes. The novel’s climactic scene is action packed and the conclusion is very satisfying.

There were technical aspects of the writing that I felt needed improving, mainly in the initial sections of the novel and at this point I was doubtful that I would give the book more than a three star rating. However as the story gained momentum these issues dropped by the wayside and I enjoyed some sections so much that that I changed my opinion.

This is a zombie novel so my expectation was that this would be action packed, which it was, but not necessarily much more. Yet, there are many themes touched upon in this novel: the plight of refugees, the physical and emotional cost of war, the nature of sacrifice, duty and honour. In the end I heartily enjoyed this book on levels far deeper than I expected to. If you want a zombie novel that is just that bit more than a shallow action adventure novel then I that I strongly recommend that you read Brink of Extinction.