The Farthest City by Daniel P. Swenson, is a science fiction novel, in which humanity is under attack by the invading Hexi and facing extinction. This is not the first time humanity has faced extinction. Generations before, the Third World War had all but wiped out the human race and they were saved from extinction by the intervention of sentient machines – the “Chines”. These Chines, having saved humanity, then left Earth and are now regarded with reverence. They have become near mythical and stories say that one day they will return to save the earth and her people. 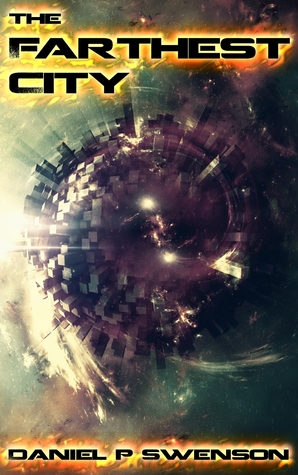 There are certain rare individuals on Earth who are known as Diggers, Lighters, Drawers and Singers. These people feel compelled to perform each of the actions that they are named for; some to the point of being driven nearly insane by their compulsion. They are regarded warily by the rest of society and generally try not to be noticed, for they are usually seized by the government when their actions bring them to their attention.
Early in the story we meet Kellen, a Drawer, who is approached by a Digger, Izmit. Izmit wants Kellen’s help to fulfil a prophecy that a Digger, Drawer, Singer and Lighter will play an instrumental part in bringing the Chines back to save humanity. Kellen’s character is well depicted and through well-placed backstory we learn that he has more reason than most to be a recluse. When he meets Izmit he faces challenges emotionally and physically that he has never prepared for and has only ever run from.

The other main character is a soldier named Sheemi who is on the front line of the war against the Hexi. I liked the depiction of Sheemi and once again Swenson seamlessly interweaves a detailed back story into her character arc – PTSD and familial dysfunction.

These two are the most developed characters within the novel, which is to be expected as they are the main characters. Both Kellen and Sheemi are complex, believable characters. However, I felt that the subsidiary characters could have been a little more fleshed out, because when they were at risk or tragedy befell them, I didn’t care.

There are some nice twists and turns within this novel and the main plot with the Chines has a lovely irony to it. At one point, listening to the scientists, Sheemi complains that there is too much “technobabble”. At times, I had to agree with her, yet this is something that I suspect fans of “hard” science fiction will really enjoy.

The story’s beginning intrigued me and hooked me. The initial pacing, though steady, is a little slow. However, just over halfway through the book the pace of the story improves markedly and there are some good action sequences within this. The Chine world is complicated and intricate, yet overall I think Swenson does a good job of getting the reader to visualise it. There were also a couple of plot devices that seemed to me to be just a little too convenient for the resolution story. Despite this and the technobabble, I found myself racing through this book and not really wanting to put it down.

I’ve debated over what rating to give this book. I did enjoy it; the speed of my reading indicates this and suggested to me that perhaps I should be giving this four stars, but because of some of the other aspects of the story I’m giving this three and half stars.

I do think that many science fiction fans will probably really enjoy it.