Alice Through the Looking Glass 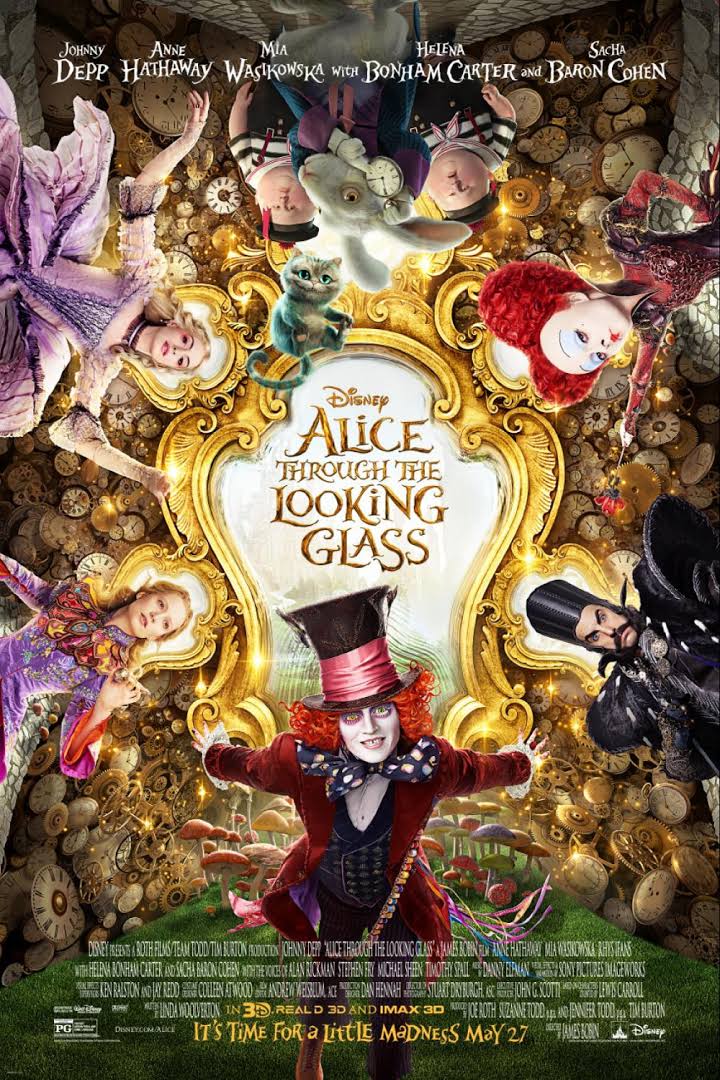 Following the call from an old friend, Alice (Mia Wasikowska) steps through a mirror and finds herself back in Underland with the White Queen (Anne Hathaway), the Cheshire Cat, the White Rabbit, Tweedledee and Tweedledum. Her friends soon inform her that the Mad Hatter (Johnny Depp) is depressed over the death of his family. Hoping to save his family and restore his sanity, Alice steals from Time (Cohen) and travels back into the past. While there, she witnesses a manner of secrets and events that could change everything.
What I enjoyed most about this film is Alice’s consistent and unwavering independence. From the very beginning, she stands her ground against those who doubt her, belittle her and believe her incapable of doing more with her life. In my book, her acts of defiance and bravery earn her place among the likes of Elsa, Anna, Merida, Mulan, Rapunzel and Tiana, all Disney Princesses who have proven themselves strong and capable without the aid of men, and who are defining and inspiring the next generation of women. She is surely a character young girls nowadays need to look up to.
Her acts of defiance also offer comic relief. One scene that sticks in my mind is when Alice and her mother arrive at the Ascot mansion. Alice is wearing a rather outrageous, rainbow-coloured dress; made for the likes of China, and not for the uptight English society. Her mother is clearly embarrassed by her choice and asks despairingly, “Must you always been so headstrong?” Alice is unfazed by this and simply replies: “No. It’s just more fun that way.” Well, you have to applaud the girl for her wit and honesty. Well said. Another aspect of this film I enjoyed was the idea and wisdom of Time, who was portrayed by the somewhat charismatic, but awkward Sacha Baron Cohen. His wisdom about time is both insightful and thought-provoking. Cohan provides wit and comic relief, however I fail to see his importance to the film. All he was doing was chasing after Alice and making matters worse for himself! The same goes for the Red and White Queen. Granted, it was interesting to see their origins, to see how the Red Queen’s head doubled in size, but again I failed to see their importance.
Alice through the Looking Glass clearly follows Alice’s attempt to restore Hatter’s sanity and reunite him with his family. If that’s the case, why did we need background to the Queens’ feud? Was it really needed, or was it just a storyline to fill the time?
I regret to say Johnny Depp’s reprisal of the Mad Hatter was weak and somewhat devastating. His voice was impossible high and for much of the film, he acted like a lost, moody, moany puppy. He played the Hatter so well in the first film. He was funny, impressable, and he had a dark side to him that only a Tim Burton film could get away with. I am honestly disappointed by his portrayal.
As always, the set design and CGI of the film was impeccable. I can’t fault the careful art and design of our favourite Underlanders – the Cheshire Cat, the March Hare, the White Rabbit and even Time’s minions – as well as the villages, Time’s epic castle and the Red Queen’s heart-shaped castle made of roots and bugs. One scene I found truly astonishing was the deterioration of time throughout Wonderland. As Alice, Hatter and the White Queen race to restore the Chronosphere, they are chased by, what can only be described as a living, breathing entity made of rust. It is Time itself, collapsing around them. The way it was animated and created was so well done and realistic. The finale definitely redeemed the film.
I was delighted to see Disney’s dedication to the late Alan Rickman. He reprised his role as Absolem, the erudite blue caterpillar-turned-butterfly who brings Alice back to Wonderland. His time in the film was brief, but it will forever immortalise him. He was a great and irreplaceable talent. He deserves it.