Hacking the Mission is the sequel to Peter McLennan’s first novel Who Will Save the Planet. 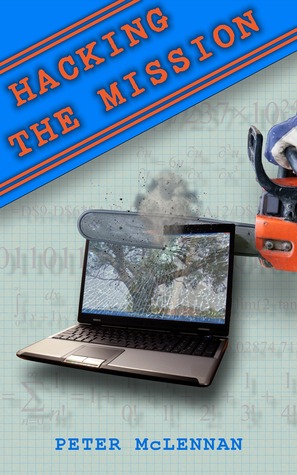 In the first book, readers are introduced to Jason Saunders, a fourteen year old Australian school boy who saves the Prime Minister from drowning when he is caught in a rip. When promised a reward by the PM, Jason is hoping for some action on climate change and ends up with a battle on his hands and a rude awakening to the brutal world of politics.

I enjoyed Who Will Save the Planet, but with Hacking the Mission McLennan has excelled and stepped the storytelling and writing up a notch.

After the events of book one, Jason finds himself disillusioned and angry. He doesn’t care about school anymore and is acting out his rage. He is determined not to express his opinions and to stay well away from the media. Yet he becomes embroiled in a local cause to save the forest from logging – or rather tree thinning. Jason’s former celebrity status with the media has made him a target for both sides in this ecological battle. Each side wants to win him over and use him as spokesperson or have him endorse their actions.

Jason’s alliances shift during the course of the story as he is manipulated by each activist group. The plot twists and turns and there’s plenty of skulduggery going on around Jason, who takes a while to figure out the machinations of those around him – he is only fourteen though and my perspective on this is as an adult reader; young teens will have a different take on this.

McLennan writes a very convincing young teen voice with Jason. I found his characterisations of both Jason and the ensemble cast realistic and engaging. While clearly an Australian story, it is one that could take place in any country and McLennan’s use of Australian vernacular is not so great as to affect the reading experience of those from other countries.

I can see the “tween” audience really enjoying this story, not only because of the language but because of the issues involved. McLennan has given us an environmental tale that has much bigger lessons and messages involved in it. Nothing is simple or clear cut in this world of politics and plans. Jason struggles to remain true to his core moral values in a morass of complex issues and competing agendas.

Together the two books tell the tale of an young man who finds the idealism of his childhood shattered, by the vested interests and political necessities of the adult world and yet who overcomes his disillusionment and ultimately succeeds in using the “system” to achieve his goals.

Action, Environmental issues, Hacking the Mission, MG, Peter McLennan, Tween, Who Will Save the Planet