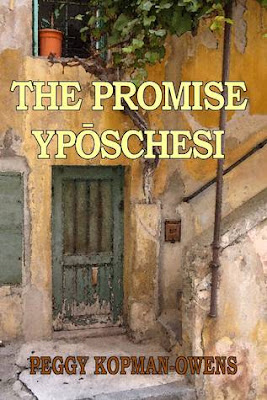 We all judge books by their covers, but in this case I’m advising you not to do that!  The cover design is one my few criticisms of this book. While this is merely my personal opinion – I really don’t think it does the book justice at all.
The Promise is very well written and easy to read.  The story is told largely in the first person from the point of view of Jamie, an author, under pressure to produce his next novel by a deadline and for it to be the miracle that will resurrect his failing career.  It is not merely Jamie’s career that is in near tatters, but his life. It is clear from the outset that Jamie is running – from everything, his deadline, his failures, his loss over the disappearance of Ben.

The plot is slowly revealed as the reader get snippets of Jamie’s ongoing struggles to sort out his life – often in a near stream of consciousness approach mixed with excerpts from the book he is trying to write about his friend Ben, on whom he is way too dependent.  Jamie describes it as a co-dependency, yet it is clear that Ben is not dependent upon him in any meaningful way.  As Ben’s activities are revealed piecemeal through the novel we come to realise that Ben is in fact far more than a journalist and when he goes missing the mystery around him deepens.
The mystery in the story is not really just about Ben’s whereabouts or whether he is still alive; it is about why Jamie is running and how his life has become such a disaster.  This is where the theme of broken promises enters – promises to parents, agents and more pertinently between Jamie and Adela (his love interest). These along with Ben’s broken promises and abandonment of his friends are all elements which dominate Jamie’s mind and result in and compound his own personal failure to fulfil his potential.  Jamie is the instrument of his own destruction and spends a great deal of time blaming others for his failings.  The ultimate resolution of the novel will be whether he turns his life around, stops living in the past, and whether he finds Ben.
Early on in the novel, the writing seemed a little too much of a travelogue for me, and less mystery, but it was none the less very enjoyable. (At this point I did wonder if the story was losing its way a little, but in hindsight that was not the case – though maybe this section could have been tightened up a bit.)  The random nature of his thoughts and his need to keep moving across Europe both reflected Jamie’s state of mind and desperation very well.  Kopman-Owens’ bio states that she has lived and worked in thirtyfive countries and it seems she really does understand the cultural nuances of the countries she focusses on and the descriptions / writing is both detailed and flawlessly fluid as she writes Jamie’s travels; the result is that the whole thing seems real and is easy to visualize. This in itself made this an enjoyable read. (Small spoiler – I would have liked one final scene between Jaime and Ben and to have heard what was said.)
There is a lot going on in this novel and to intersperse Jamie’s stream of consciousness with bits of his writing and flashbacks to his past, and the occasional switch of point of view to Adela is no easy task in terms of writing and Kopman-Owens handles this with aplomb.  I had absolutely no trouble following what was going on and she kept my interest all the way through. She has constructed a complex character with Jamie, one you don’t always like (once or twice I wanted to knock some sense into him) and ultimately gives us great insight into his psyche.
Part of the way through, I thought of giving this a 3.5 star rating, yet I found myself surprised at how much I had enjoyed this and in analysing how all the diverse elements of Kopman-Owens’ plot had come together really very well  – I’ve given it  four stars.