I had high hopes for this version of Macbeth as I’m a fan of actors Michael Fassenbender and Marion Cotllard.
I’ve also seen many film adaptations of Macbeth and sadly this does not rank up there amongst my favourites.   I liked a great deal about this interpretation, but it was the performance of the lead actors that didn’t appeal to me.
Macbeth opens with the funeral of Macbeth and Lady Macbeth’s child.  (The child is alluded to in Lady Macbeth’s speech later in the play.)  I liked the idea of opening with this and the portrayal of their grief. It placed emphasis on an aspect of their relationship that other versions have not.

Perhaps this emphasis is to make them appear as a couple mired in grief which contributes to their disastrous series of choices. Other reviewers have suggested that Macbeth is portrayed as a man who is suffering post traumatic stress due to constant brutal combat and this accounts for many of his actions.  Fassenbender’s performance does lend some credence to this theory, but this did not alter my appreciation of their performances.
There were some minor deviations from the play, particularly regarding Malcolm, but they worked well in terms of giving a different emphasis to Macbeth’s actions, and backed the notion of a PTSD affected Macbeth. The supernatural elements of the play are woven interestingly through this film and I loved this version of the witches. 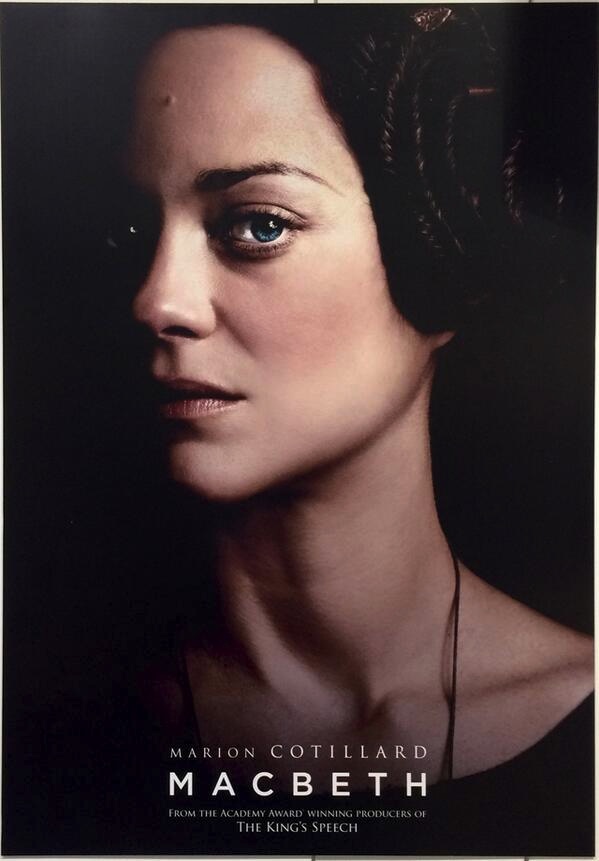 The whole film has a suitably grim, dark, austere and primitive atmosphere, from the colour through to the landscape and sets.  All this worked, perhaps too well.
Fassenbender and Cotillard both seem, for the most part, to remain locked so firmly into the grimness that they exhibit only a couple of facial expression throughout. Lady Macbeth’s speech were she says –

“Come, you spirits
That tend on mortal thoughts, unsex me here,
And fill me from the crown to the toe top-full
Of direst cruelty! make thick my blood;
Stop up the access and passage to remorse,”

– is one which should be filled with passion, yet in this film it is not.  Nor is Macbeth’s speech where he is supposed to agonise over whether to kill Duncan.
As the film progresses, we do see glimpses of what could have been.  Cotillard is wonderful when Macduff’s family are being murdered and when she “sleep” walks and exposes her guilty conscience.
From the death of Lady Macbeth onwards, Fassenbender’s performance improves greatly and we start to see the passion, conflict and fatalistic resolution within Macbeth’s character.
I loved the final scene.
Two out five stars.