The Milliner’s Secret surprised me. I didn’t think I was going to like it – how wrong I was.
Cora Masson works in a hat factory in England; her life holds few pleasures. She works long hours to save money and invariably has all that she has earned taken by her drunken violent father. 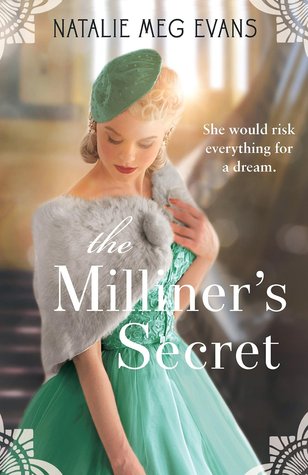 During a rare day out at the races with her friend Donal, she encounters a handsome stranger, Dietrich von Ebling; to escape her home life she travels to France with him. Once there she reinvents herself as Coralie de Lirac, fabricating an aristocratic background to launch herself as a fashionable milliner.

Set in Paris from 1937 through to 1944 the Evans weaves in the political turmoil of the war years, black market gangsters, conspiracies, revenge and love into a detailed multifaceted novel. She successfully creates a story that is bigger than just the relationship between Coralie and Dietrich and engages the reader thoroughly with the secondary characters.

The real surprise for me was that when I started this book I thought I was going to hate it. The book opens in a seedy, smoky, French nightclub complete with sleezy bar owner (who’s a criminal), the requisite SS and other German military. There is nothing wrong with beginning like this, but it reminded me of so many movies and clichéd ridden books that already exist, that it had me worried for what was to come.

I KEPT READING and I am so glad that I did. This became a book that I couldn’t put down and I wound up loving it.

Evans writes great characters. They are complex. They make mistakes. Coralie is impetuous and, at times, appallingly naive, and this often causes her great problems. There were moments when I wanted to scream at her and times I just loved her – all because Evan’s writing hooked me. Dietrich himself is a flawed hero who is, however, endlessly forgiving of Coralie. (The number of times they break up and get back together must be some kind of record.)

What I really liked is that, romance aside, the subplots and detail of the other characters is excellent. Very occasionally I was aware I was being “told” information, which lifted me out of the story – namely historic details, which perhaps were needed for some readers. However those moments were very brief. The horrendous political events of WWII – arrests, concentration camps, starvation and daily struggle to survive, the rise of the resistance, courage, endurance and inevitable loss are all very skilfully woven together. Evans covers a lot here and it doesn’t feel like she’s trying to do too much in one story.

I was well aware as I read what direction story was going to take in regard to its end point, but I HAD to finish and when I finished I felt a profound sense of sorrow that the journey was over. I haven’t felt that way about a book in long while.