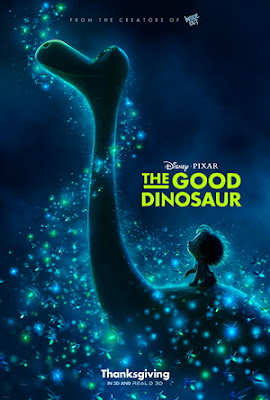 The Good Dinosaur is an extraordinary journey of self-discovery, complete with thrilling adventure, hilarious characters and poignant heart.
In an alternate reality where dinosaurs still walk the Earth, a small and timid Apatosaurus named Arlo (voiced by Raymond Ochoa) finds himself separated from his family, and at the mercy of the wilds beyond his farming home. To survive, he forms an unlikely alliance with a human cave-boy (Jack Bright) and encounters an array of wacky and unusual characters, who both challenge and change him.
Family is at the heart of every Disney & Pixar film you see, and The Good Dinosaur was no exception. The film opens on two Apatosaurus farmers, witnessing the birth of their three children: Libby (Maleah Padilla), Buck (Marcus Scribner) and the runt, Arlo. While Libby and Buck easily adjust to life and their responsibilities on the farm (signified by a mud-print on a corn silo), Arlo’s fearful nature makes his tasks difficult for him. But he is determined to prove himself, particularly to his father (voiced by Jeffrey Wright) whom he admires. But in a heart-wrenching twist, the father is lost in a violent flash flood, and Arlo is swept miles downstream and far from home. This pulled more than a few heartstrings, because it reminded me of Mufusa’s death in The Lion King. Need I say more here?
On a lighter note, I was thoroughly entertained by the interaction and relationship between Arlo and Spot. Their childish banter and antics made me smile, particularly scenes where Arlo plays with Spot. In one scene, he ignites a swarm of fireflies and chases after them with Spot by his side. In another, Spot blows into a hole in the ground and forces out a small gopher-like creature. Arlo does the same and dozens burst free, and then slowly crawl up his legs. His slow, yet dramatic realisation was perfect comic timing in my opinion. However, the pinnacle moment for me, a moment that left me in tears, was when Arlo thinks of his family and displays them in the form of twigs. Spot may not be able to speak, but he understands what is being shown and does the same – sadly burying the twigs of his mother and father.
It was at this point that I fell in love with the film. Here they are, two very different creatures coming together over their own personal tragedies, finding solace and a lasting bond. Friendship is another aspect Disney and Pixar excel, and they certainly didn’t disappoint here.

What I also like about this film is the unusual backdrop. Most Disney & Pixar films are set in castles, a children’s bedroom, a factory, an anthill, but not The Good Dinosaur. Yes, it’s set in prehistoric times but with a western influence and twist. For example, Arlo and Spot encounter a grizzled Tyrannosaur rancher (voiced by western stalwart Sam Elliott), who needs their help to chase off some velociraptor cattle-rustlers. This was slightly confusing at first because, really, you think of Tyrannosaurs are ferocious, bloodthirsty creatures, but this film, they’re as friendly as Larry and even help Alro find his way home. Talk about a twist.
But not every encounter along the trail packs quite the same thrill: a Dumbo-channelling hallucination sequence and an encounter with a styracosaurus shaman and his collection of “pets” are both oddball highlights, while a group of unhinged, storm-chasing pterodactyls comparatively feels like peril-by-rote.
Overall, it was a wonderful, heartfelt film. Its emotional climax – made 100 times more heart-wrenching for being entirely dialogue-free – was rigorously earned. I would definitely go and watch it again. Its fun for the whole family, and the kids will love it. I sure did, and I’m twenty two.

Hannah M King is the author of The Dorston Fall which is a wonderful YA fantasy adventure.  You can find it on Wattpad here:
https://www.wattpad.com/story/8220409-the-dorston-fall-book-i-in-the-dorston-legacy