Skye is the young, Melbourne based author of Aim.  Aim is a rip-roaring middle grade, fantasy adventure involving the Greek Gods. Well worth a read!

Supernova!
I’ve been looking forward to Supernova ever since Tracy M. Joyce told me about it in February.
Yesterday, Dad and I caught the train early and right from the start the excitement was building. Initially the train had a couple of Pokemon cosplayers and a very well-executed female Joker. Later we were packed in like sardines – only sardines with various wild hair colours, frivolous outfits and weapons galore.
Upon arrival at the Showgrounds, the long line to get into Supanova dissolved quickly enough and we were handed show bags with all we needed to know to navigate Supanova. Only we didn’t have all we needed to know! The maps weren’t exactly very helpful and we were confused as to which building was which. Where did we get signatures and photographs with the epic famous people? Where did we buy amazing merchandise and squeal over the brilliant costumes? Where were the seminars, where were the workshops? It took a bit to figure it all out, but the one thing we were always certain about was the location of the food – chock in the centre and pretty hard to miss. 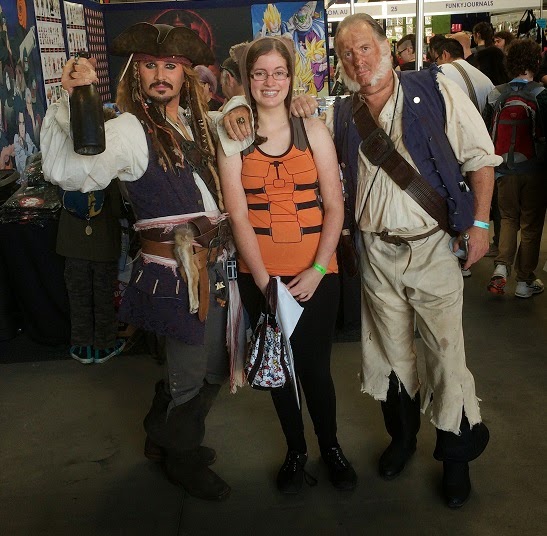 The exhibition building,  where all of the stalls were, was teeming with people. However, later in the day Dad and I found out the true meaning of the word ‘crowded’. We went from stall to stall and took pictures with many amazing cosplayers. Jack Sparrow and Joshamee Gibbs’ outfits were particularly detailed and sitting in the DeLorean next to an eerily lifelike Marty McFly was thrilling. Getting a picture next to a Dalek with the TARDIS as the perfect backdrop was wonderful, and one of my favourite stalls was nearby – called ‘The TARDIS Guy’. This stall and its owners went to the trouble of telling me how they made their impressive aluminium Captain America shields with fitted straps on the back. It made it into my top three stalls. 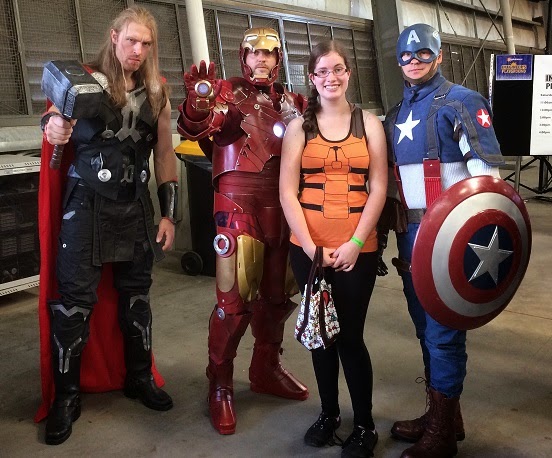 I eventually found three of the Avengers – alas, Hawkeye and Black Widow could not join us. Iron Man’s suit actually glowed, which I found amazing, and both weapons for the Captain and Thor were equally well made. Seeing a life-sized Hulk-buster suit was a highlight of the day.

Finally, Dad and I got around to the Odyssey Books’ Stall, where we met Tracy with several of her author friends. What a setup! The selection of books was amazing and I had a lovely chat with Vacen Taylor, author of the Star Child Series (I’m going to research this series a little bit – I have a strong feeling that several primary school students I know would fall in love with these books the way I fell for Deltora Quest).

I made my first purchase at CRAM!Studios to get a poster for my sister, but the most worthwhile one was at the artist’s stall next to Odyssey Books – Destiny Blue Artworks. This stall featured large, unique prints with explanations and quotes written beneath. The owner actually goes by the moniker – DestinyBlue (Blue for short, I believe). I bought a large print from her that was called “Not Alone”. All of her artwork is stunning and deserves lots of appreciation. The style is particularly fascinating, having the look of pastels or bright crayons whilst actually being digitally drawn! I can’t wait to get “Not Alone” framed and on my bedroom wall and save up for some other prints. DestinyBlue’s work is now my current art obsession. (Check out Destiny Blue on DeviantArt)

Dad and I also went to the Madman Cosplay Competition, which had the grand sum of two performances to watch and ten times as many advertisements in between. This was disappointing, but I wasn’t upset by the performances and I was stunned by the detail and effort placed into the costumes, weaponry, and cosplaying. 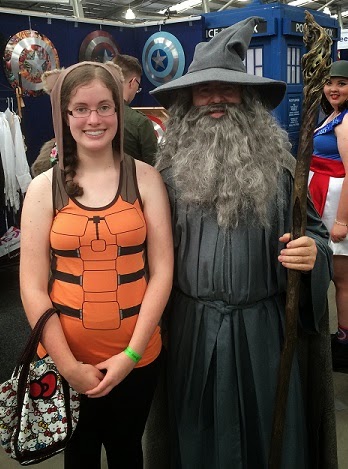 We then proceeded to wander back through the exhibition, this was when it truly became busy. Squeezing through the crowd was arduous. Though we took more photos with awesome cosplayers, like Gandalf the Grey (Gandalf the White was wandering around as well), another amazing Rocket Raccoon (I must say, my long-lost twin’s costume was far more elaborate and realistic than mine!), and I even spotted a female version of Loki. 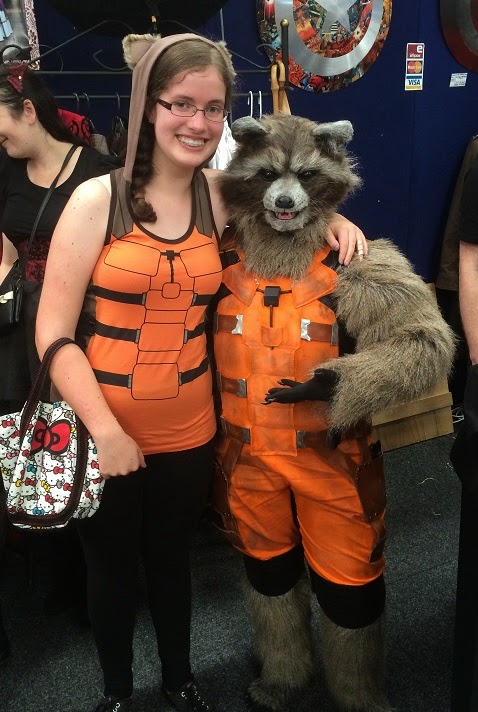 On our way to an afternoon workshop, we passed many contact lenses stalls, which I stared at wistfully. My next Cosplay plan is to dress up as a female version of the young Professor Charles Xavier – the only problem is that I have dull green eyes, not bright baby blues (sorry, MacAvoy, but they are). Dad refused bluntly to let me buy a pair, unfortunately, so I suppose this idea will have to wait until my later years of going to comic conventions.
The afternoon workshop with Wirru (twice winner of the National Cosplay Competition, wearing a spectacular suit of shining green armour and a massive, intricate headpiece) was very informative. We learnt how to shape, paint, and glue pieces of foam to make our own suit of armour or another kind of Cosplay costume – whatever we wished to make, really. I soaked up the information and admired the skill behind the work. I also enviously noted that Wirru had a creepy yet epic pair of contact lenses in that blacked out his entire eyes like a person possessed. Despite their awesomeness Dad is still not buying me a pair.
Ready to head home, we grabbed a couple more pictures on the way out – one with a 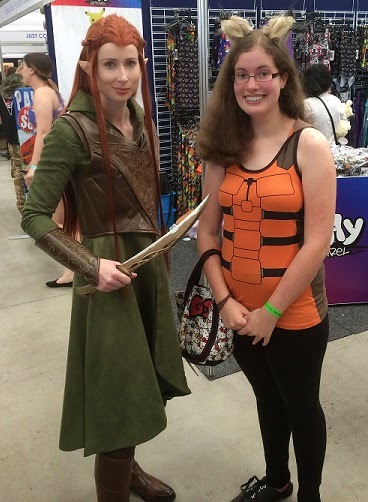 perfectly equipped Tauriel from the Hobbit, one with a stylish Peggy Carter and a picture with Dean and Castiel from Supernatural. (Two of my best friends were doing this cosplay and it was wonderful luck to have bumped into them). I bought my new pair of Lynx Ears, which went well with my costume. (I’ve insisted on wearing them to the shopping centre today, and around the house. They go with everything!), and we dropped by Odyssey Books one last time to say goodbye to Tracy, Vacen, and the rest of the team at the stall.

Overall Supernova was every bit the success I expected it to be – filled with art, music, cosplay, good food, and a crowd I felt I fitted in well with. The only downfall was being unable to stay for the actual Supernova Cosplay Competition in the evening and the extortionate price of the food – but then again, I should have known about the latter. There was something for everyone in the way of merchandise. Things like great statues, posters and quality comics were priced aptly for what they were, and smaller things like the ever popular Pop Vinyl’s were great, cheap gifts for friends.
I’m very glad and grateful to have gone and I recommend it to any person with a great passion for movies, comics, books, artwork, and putting ludicrous amounts of effort into finding a unique costume. Note: If you think that going as Deadpool, Spider-Man, Fourth/Eleventh Doctor or Batman is an original idea, you’re wrong – very, very wrong. But do it anyway – who doesn’t love those characters?
Skye Lotus