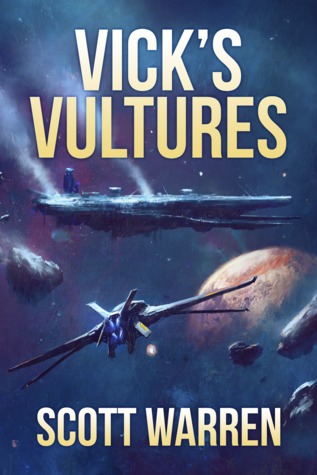 This military science fiction novel crossed my review desk ages ago. The publisher requested that I review it saying it had “pioneer spirit and the wisecracking tone of Firefly combined with the action and taut pacing of  Mad Max: Fury Road.”
At the mention of Firefly I was hooked. How could I resist?
Vick’s Vultures is set in a future where Earth, far behind the rest of the universe in terms of technology, runs a privateering fleet of spaceships whose crews scavenge alien tech from wrecks.  This enables earth to gradually expand its reach into universe and slowly cultivate tenuous alliances while aiming to keep Earth’s location off everyone’s radar.
The story emphasises the position of Earth as being at the bottom of the universal dung heap with a government that walks a fine line between keeping Earth’s location secret because they’re hopelessly outgunned and slowly acquiring power / tech so they can one day defend themselves in a universe full of more advanced and often predatory species.
Victoria Marin is the Captain of the U.E. Condor and on one of her scavenging missions, she and her crew stumble upon an alien prince in need of rescuing, then find themselves firmly in the middle of an age old war between two of the most advanced civilisations in the universe.
Vick’s Vultures is fast paced from beginning to end and the action sequences are excellent.  The story arcs, tension and world building thoroughly engaging.
The character of Victoria and the obsessive Dirregaunt Commander, who is the villain of this piece, are a little stereotyped but none the less fun to read. I found some of the secondary characters more interesting than the main ones.  I felt like the end needed a couple of extra scenes rather than an epilogue that summed everything up.  I would like to have read the unfolding of the final events after the big battle finale.
However, what I particularly enjoyed were the various alien civilisations that Warren constructed.  I found them unique, enjoyed the different cultural / social customs and loved the backstory of intricate politics and betrayal.
The whole feel is rather like Firefly crossed with Star Trek.  It’s space opera done very well. I became hooked on reading it and abandoned my afternoon plans to finish it.  It was rollicking good fun.
I’m definitely going to read the next one and check out the rest of Scott Warren’s books.
Four Stars!