(To The Brave Crumbling Sky, Book One) 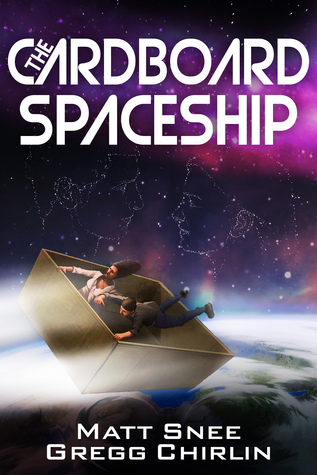 When I received the review request for The Cardboard Spaceship, the author described it as “a mind-bending adventure in the style of say Theodore Sturgeon mixed with Douglas Adams. It’s inspired by old pulp writers, and while humorous in parts, it is also very sentimental.” He was not wrong.

I’m not a big reader of science fiction and I have not read Theodore Sturgeon, though I have read Douglas Adams and I am aware of the style of the old pulp science fiction novels and I guess that The Cardboard Spaceshipis written in this vein.

The novel centres on a writer, Lewis Darby, nearly 40, who still lives with his mother.  In the evenings Lewis goes down into his basement, sits in a cardboard box, and pretends he is a starship commander.

Lewis meets Jennifer, a beautiful young woman, who insists she is a fan of his work, and just wants to chat.

The gormless, slightly love-struck, Lewis doesn’t seem to have an in-built radar for stalker types and so, naturally, his fortunes take a bizarre turn for the worse in which he discovers the veiled reality of  life on earth and the possible impending demise of both himself and the planet.  (Although to be truthful things would have been much worse for him had Jennifer not arrived.)

Jennifer, it turns out, is a space traveller, with a specific mission:  to find Lewis, save him, and enlist his help in stopping the destruction of not just earth, but the universe.
From here on out, this is a madcap adventure that I could only describe as Lewis Carroll in space.  I kept waiting for the Cheshire Cat to appear with directions or the Mad Hatter to save the day.  After my first WTF moment I just decided to adopt the same approach that I have when I watch super hero movies – I stopped thinking.
The result – I really liked it.
I just smiled, laughed and enjoyed what was a bizarre adventure.
My main quibbles with this story were stylistic.  At times the writing was simple and was a classic example of “telling” rather than “showing”, yet at other times the story flowed very well. Therefore, some sections I raced through and some sections dragged. I was left wondering if this was a by-product of this being a collaborative effort and a poor blending of the different styles of each author.
Over all this is an enjoyable story and could be read by the MG audience through to adults.