Book Review – The Opposite of Life

The Opposite of Life 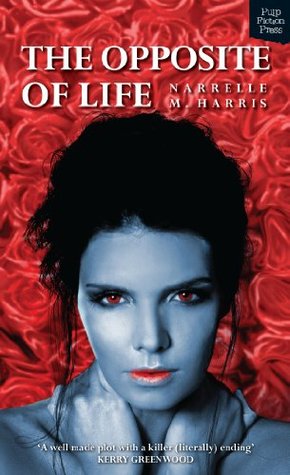 Prepare to have all your favourite vampire myths debunked! In The Opposite of Life by Narrelle Harris, you’ll meet a plucky librarian, Lissa, and Gary, a vampire whose fashion sense goes no further than garish Hawaiian shirts.

Harris’s novel is set in Melbourne and it’s lovely to read her depiction of a town she obviously knows so well. The detail she includes about the Melbourne streets will appeal to Australian readers and particularly those from Melbourne, but I wondered if it would hold the same appeal to non-locals – I suspect in the end those details will necessarily be glossed over by them but the settings will still be very effective.

“The night I went dancing with Evie I found two girls on the floor of the ladies’ loos, with their throats ripped out.”

This is a great opening line and what follows will make you laugh as self-absorbed Lissa bemoans how this is just typical of the stuff that happens to her – get dumped, mope, go out and find dead bodies. Harris’s depiction of Lissa and her turn of phrase had me laughing a lot. There is a really appealing dark humour to this novel blended with some lovely poignant moments.

Lissa has the wondrous fortune of getting over being dumped by meeting a young goth guy and the potential is there for “true love” – or at least that’s her hope, until he is killed. Determined to find out who is ruining her life (it’s all about her at this stage) and who is killing people around her, Lissa undertakes her own investigations. This is how she meets Gary – the “daggy vamp” with a penchant for Hawaiian shirts. The development of both these characters is excellent.

A vampire in Hawaiian shirts – yep Harris chucks several vampire stereotypes out of the window and I love it. There are no tall dark and handsome, brooding vampires to take your breath away and romance you. They range from creepy stalker types, arrogant toffs, through to your ancient predatory (utterly unappealing) ones.

Occasionally I wanted the pacing of the novel to pick up, but really those moments were few and far between. There are no plot surprises about who is the bad guy or where the plot is heading. However, I found that neither of these mattered, because what I was enjoying was the development of the friendship between Lissa and Gary. Gary’s friendship with a human makes him different to other vampires and sparks some fundamental changes within him.

There is an underlying theme with the work about the importance of social connections and what it means to be human – it was this that really carried the story for me.