Katie is a writer, illustrator and book cover designer. She lives in the Central Wheat belt of Western Australia.  Katie has illustrated many books and has authored four novels – all of a fantasy bent including The Dragon Box for children through to the wonderful Treespeaker series for adults. (I’ve read the latter and thoroughly enjoyed it.) Now Katie has embarked on a fun project for kids – the beautifully illustrated  Famous Animals series. 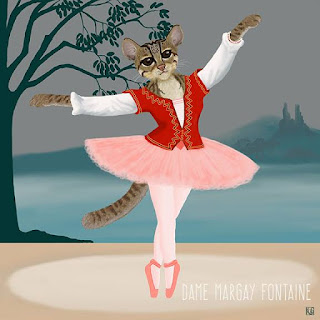 What inspired you to create your Famous Animals series?

I was taking part in the 52-Week Illustration Challenge on Facebook and the theme was “Italy”. I couldn’t get past ‘opera’ when I thought of Italy, but I didn’t want to have to try to draw a real opera singer, so I drew a fat little mouse in tails singing his heart out. Looking at the finished piece, I decided it wasn’t a mouse, but a rat and then I thought, “It’s Pavaratti!” I couldn’t sleep that night, because my head was full of other animal puns of famous people…and so a book was born.

How did you choose which famous people / animals to include in the series? 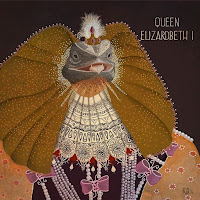 For Volume 1, I did a general book of famous people from all walks of life, with no particular theme in mind. I just wanted to see how it would go really. I kept to people who were no longer living, because I wasn’t sure what the reaction would be from living people, but really I just kept going through the list I’d made until I had a good collection of both males and females. When I say ‘the list I’d made’, I should add that quite a few of the ideas came from people on the British ‘Kindle Users Forum’. Being British, they loved puns and came up with some really good ideas. 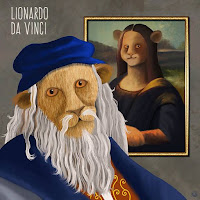 When I did the Famous Animal Leaders calendar that I’ve just put out (available from Redbubble – adaptable to any starting month so you can buy it all year round), I stuck to pre-twentieth century leaders. If I’d chosen modern leaders, people might have wondered why I chose one politician over another and I didn’t want to get into politics.

With Volume 2 of Famous Animals, I have done some modern characters as well as the historical ones. It has a musical theme and you can’t really cover music if you don’t include some modern musicians. So it covers composers, singers, instrumentalists and dancers from Mozart to Lady Gaga. I’m trying to get this one published by a mainstream publisher though, in the hope it might reach a wider audience.

What medium did you use to create the artwork? How do you go about commencing these drawings? Did you have a clear vision in your head of what you wanted each to look like once you’d decided on which character you were going to draw? 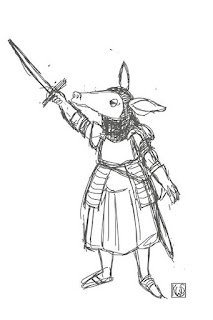 I work entirely on the computer, using a Wacom Cintiq 13HD tablet. They’re all done on a 12in x12in canvas, though in hindsight, I wish I’d used a different shape. I love the Cintiq because I can see what I’m drawing on the screen, or I can look up to my big computer monitor and see more detail. I start with the blank white canvas and a whole lot of reference photos/paintings around it (in Photoshop). I draw the basic idea in black on a transparent layer and then build the painting up in layers underneath that, until I don’t need it anymore and then I turn the drawing layer off. I generally decide on a background when I’ve finished and slip it underneath the character. That’s the joy of digital art. You don’t have to think in order. You can completely change your mind on something without ruining the painting, you can erase without damaging the canvas and you can experiment to see how things look and then go back to the original if you don’t like it. 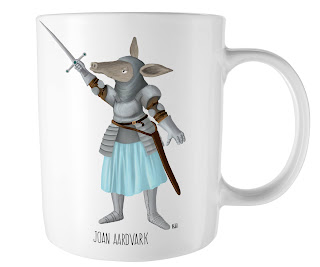 I don’t always know what I’m going to do with a character before I start and sometimes I have to restart a few times before I’m happy. Often though, especially with the historical figures, there’s a painting that I can see as an animal straight away, so I use that as reference. Sometimes the image I come up with is a collage of ideas from different images I’ve found.


Sometimes I finish a painting and I just don’t like it. I haven’t deleted any of them because I might later on see a way to fix it, but they don’t get used if I’m not entirely happy with them.