Daniel is a Californian writer of science fiction, with many published short stories to his name and his novel The Farthest City is a great sci-fi read. (You can check out my review of it here)

Had you always want to be a writer?

I never thought of becoming a writer until my mid-30’s. At some point, after finishing graduate school, not having any more productive way to use my time, and after reading one too many less-than-stellar science fiction novels, I decided I too, could write one. After all, it couldn’t be that hard, could it? My very first short story was a whopping 14,000 words. After writing many more short stories (and publishing a few), two unfinished novels, and one completed novel (The Farthest City), I can attest writing of any kind, but writing well, IS hard (at least for mere mortals such as myself). That being said, I can’t seem to stop at this point. I get to go on all kinds of adventures, visit places no one has yet explored, and meet the most interesting people. And the fact that it’s all happening in my own head makes it rather affordable, as far as adventures and vacations go.

Do you feel particular writers have influenced or inspired you?)
Influential writers for me include William Gibson (his writing’s gritty realism really struck me) and Ursula K. Le Guin (especially for the poetic flow of her language). 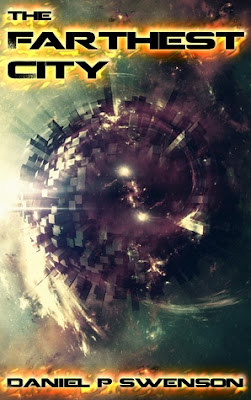 I thought—what if they saved us instead? The setting of The Farthest City is based on this unique premise: humanity destroyed itself in a third world war. When the dust settled, our species was resurrected by intelligent machines raising a new generation of humans from frozen embryos using artificial wombs. Then the machines depart into space, ceding Earth back to us. The book opens with an alien invasion threatening a second human extinction and the machines’ help is needed once again.

I also tried to imagine what machines might be like if they did become sentient. The challenge was making them as different and non-human as they would probably be, while still making them relatable as characters. Would they merge into a single near-omniscient, soulless entity, or develop as individuals with personalities, goals, and ideals? How would they live—in virtual worlds or using interchangeable bodies in the real world? How would they evolve? How would they live differently from us? How would they relate to their bodies, if parts are replaceable and souls programmable? All these questions are explored further in the book and lead to some interesting story developments I hope will entertain readers as much as they fascinated me.

What, if anything, influenced the style of Chine world?
I spend considerable time on-line perusing science fiction and fantasy art, especially on sites like DeviantArt.com. When it comes to robots, you tend to see more humanoid robots with two legs, two arms, and a head than other designs. I also have a biology background. I assumed if machines began to self-evolve, they would not try to follow the human design, but would create their own designs based on whatever options are possible and best-suited for their purpose. Towards that end, I considered all the various, non-humanoid designs for locomotion nature and technology have arrived at. I went through the same process thinking about machine architecture—what would they need and desire from the structures they build? Shelter, yes, but probably not with the same parameters for air composition, temperature, etc. Would they need/want privacy? What’s possible if you lack the human fear of heights or confined spaces? With their various body types and means of locomotion, how would they access structures, move within cities, etc? Oddly enough, I found fractal art an inspiration for some of my machine architecture ideas. The result is the City of the Six Suns where buildings are adjustable, and machines travel straight up or through buildings, however it best suits them.

How much planning did you do prior to writing this novel?
At the time, I felt I had sufficient notes to get started— a profusion of ideas, a rough plot outline, some barely sketched-out scenes, and bits of dialogue. In retrospect, I think I winged it. I had a vague idea of where I wanted to go and the themes I wanted to explore, and I cobbled the story together as I went along. Getting it critiqued at Critters.org and then professionally edited (by Marcy Kennedy, my developmental editor, and Chris Saylor, my copy editor) really helped strengthen the story and polish it.

Can you tell us about your next project?
After brainstorming ideas, assembling notes, and doing world-building research for several months, I’m about to begin writing the first in a series of novels. At this point, I don’t even have a working title. The story is much larger in scale, populated by several alien species, and with humanity scattered among the stars. The Milky Way Galaxy is also inhabited by hyper-evolved, almost god-like beings who are millions of years old and drive the plot in various ways. One thing I’m doing differently this time around is spending considerable time developing characters (seventeen so far). These people have already taken on a life of their own—they keep popping into my thoughts telling me what they want to do. I better get started soon!