** I was provided with a copy of this book by the author in exchange for an honest review. ** 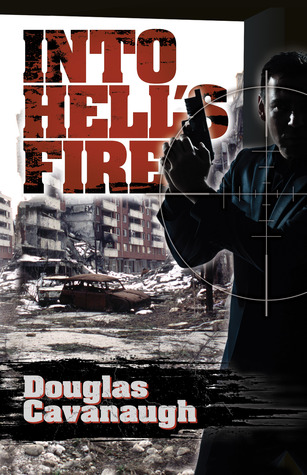 The Balkan conflicts of the early 1990’s would seem ideal fodder for an action / spy novel, yet with Into Hell’s Fire, Cavanaugh has delivered a novel that I can best describe as having a hybrid style – it is a mix of an action novel and a history book.

This stylistic choice is an interesting one and has resulted in me pondering this review more than usual and being far more analytical in it than others I’ve written.

Lucas Martin is a former Vietnam veteran and retired covert operative for the US. Lucas’ extensive experience has seen him involved in numerous conflicts and having done in depth work previously within the Balkans and having predicted, in his final report, the future potential problems in the area.

The State Department recalls Lucas to active duty in order to gather information for them. This then is the catalyst for the ensuing adventure. Lucas has emotional ties with the region, having been born in Croatia, and he reconnects with old contacts in the pursuit of his mission. What follows is an intricate tale entangling his objectives, the necessity of helping a friend and a horrendous web of political lies and corruption.

The political situation within the Balkans has always been complicated and the author does an admirable job of explaining the myriad complexities of the region by integrating some solid history sections within the narrative. Most of this occurs within the first third of the novel. However, it is these sections that I didn’t enjoy within the story, primarily because several of them are long and resemble “info” dumps. There was also a tendency within Cavanaugh’s writing to detail every action of the characters, even where this was not necessary. These two traits had the effect of “telling” me the story and taking me “out” of the narrative and any connection I was making with the characters deteriorated. I do believe these sections could have been “tightened” up and this effect lessened.

I debated the author’s choice of putting these history sections in, but, given that he has lived in the Balkans for 20 years, I suspect his own connection to this area may have meant that he wanted to remain “true” to the area and history. It is very easy to sensationalise events and storytelling (here I’m thinking pure “Bond” style spy stories) for pace and in doing so sometimes diminish other story elements that deserve recognition.

Perhaps putting these sections in served not only to explain the complicated history to those unaware of it, but to ensure that a ring of truth remained within the narrative, which is a praiseworthy aim. So, though they detracted from the experience for me, they may prove hugely helpful to other readers.

Fortunately, in this early section there is a simply brilliantly scripted scene between Lucas and a State Department official, Morton Riggs. This scene convinced me of the quality of Cavanaugh’s writing and made me persist with reading Into Hell’s Fire.

In the latter half, the novel really hits its stride.  The problems I encountered with the story largely evaporated in this section. Cavanaugh provides us with an excellent array of characters, with detailed backstories, whose tales really highlight the tragedy of this conflict.

I loved the intricacies of the politics – both within the Balkans and with the US and NATO. The various plot arcs are interwoven very well and there are some fine action sequences and scene setting with the author’s detailed knowledge of the area adding to the realism of the story. I could clearly visualise the bombed out cities and beautiful coastlines – the irony of the changing conditions so close to each other was not lost on me.

All in all I did enjoy Into Hell’s Fire, I wasn’t as engrossed in the story as I hoped to be, but it was definitely worth the read I can see many readers loving it.

I’ve debated about how to rate this book 3.5 or 4 stars, I’m leaning toward 3.5. If you love spy / action / thriller novels and history, then take a look at Into Hell’s Fire.