Patricia Leslie is an Australian author of urban fantasy from Sydney.

Please tell us a little about yourself?
I was born in the hippy days of the mid 1960s to parents who were not hippies so I’ve had a very normal upbringing in the suburbs. I managed to survive all of that and grew up to be the quiet and reserved one who spent a lot of time observing everything and everyone around them. Add an over abundance of day dreaming ability and a fundamental desire to spend a good part of everyday reading and being creative, and it’s probably no surprise that I turned to writing fantasy. Eventually day dreamers need to express themselves in the real world.

Your next novel is A Single Light. Can you tell us a little about it?

A Single Light is an Australian urban fantasy/horror story set in the southern suburbs of Sydney (the Sutherland Shire). The bush can be a really scary place: tall trees, deep gullies, thick scratchy scrub, lots of mysterious things slithering and scurrying out of sight. It’s noisy when you want it to be quiet and quiet when you’d much rather a little noise. It’s easy to get lost in and easy to imagine all sorts of horrible things going wrong. Like the deep dark woods of Europe and America folk lore, the bush plays on half forgotten memories and stories, and warnings from over cautious parents not to stray from the path. That’s what I was after with this story: a mix of instinctive fear with modern, very Australian characters.
What we have is a battle between “supernatural” beings, the friendly Alffür (in league with a group of humans) and hungry Bledray. An eon of fragile balance of power is now tilting in favour of the Bledray who have the unpleasant habit of feasting on the Rydri (us). The Bledray are gathering on the edge of a little town surrounded by the Royal National Park; battle is about to commence.


“The battle scenes were awesome,
I flew right through them, devouring every page…
That ending. I didn’t expect that at all…like at all. I definitely stared at my Kindle in complete shock for a solid minute. ”
Lenissa, Goodreads
What prompted the idea for this story?
A poem, actually. It’s called “Poem to Be Read at 3 A.M” by Donald Justice
Excepting the diner
On the outskirts
The town of Ladora
At 3 a.m.
Was dark but
For my headlights
And up in
One second-story room
A single light
Where someone
Was sick or
Perhaps reading
As I drove past
At seventy
Not thinking
This poem
Is for whoever
Had the light on
It was the stark imagery of being out at night, travelling alone, and connecting with a single light that shows the traveller is not alone, not completely disconnected, and perhaps even is expected somewhere. Similar to the leaving of a light on for the person who is out late so that they can see their way to home and safety, and the lighthouse on some rocky headland signalling danger to passing ships. This is what started the story in my head. Then, of course, I needed the reasoning behind why a traveller might connect with the light.
Tell us about your main character?
There are two main characters; Rick Hendry and Lael. The story started with Lael, a solitary traveller whose purpose is to watch and protect. She is one of the Alffür Hunters born out of the last holocaust where all life, including that on Earth, came close to extinction. The Alffür and the fledgling Rydri (human) races barely survive. The remnant Alffür take on the ongoing protection of the Rydri seeing in them hope for the future. Rick becomes Lael’s connection with humanity as she realises that future is once again under threat. 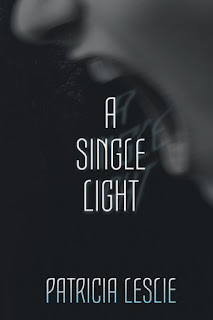 How much and what type of research did you do for A Single Light?
Mostly only location research with some general reading into creation stories and mythology from various earth bound cultures. By earthbound I mean cultures that are intrinsically connected to the earth. This is reflected in the excerpts from the Journal of Malaik. The idea of Miaheyyucomes from a book, Seven Arrows by Hyemeyohsts Storm. However, the cultural aspects of the Alffür is a mix of Native American, Celtic, and Arthurian legend, and, to be honest, anything else I’ve read about that’s stuck in my head. The concept of the circle and the tree can be found in many mythologies and is something that I feel very connected to.

Your previous novel The Ouroboros Key was urban fantasy too – Is this your favourite writing genre? Did you read a lot of this growing up?
I’ve always read a lot of high fantasy and historical fiction. I’ve found these meld quite well to produce modern urban fantasy. Also I get a lot of my ideas from history that has been hidden or ignored or just not that well known.

With The Ouroboros Key it was the hidden aspects of early christianity and the many ties it had with myth, legend and other religions. This was in the days before Da Vinci Code so it was not well known at all.

A Single Light makes reference to urban and folk lore in a subtle way through our fears rather than to any specific point of history.
I also enjoy literary fiction and crime novels, and read a lot of non fiction as well.
Why do you like writing in this genre?
I like history and the human story. I think that involves magic whether we want to believe it or not, which is why fantasy, horror and ghost stories remain popular. We all know what to do when we come face to face with a vampire, right? And even though we know they don’t (might not) exist, we’ll reach for some protection if we hear unexplained “bumps in the night”.
Besides that, I really enjoy the scope for creativity I find in writing urban fantasy; in starting with something that is modern and everyday and working it into something a little more mysterious or a person who is ordinary, just like us, who becomes involved in the true “weirdness” of life that lays just below the surface of reality.
Bonus question: What do you do when you’re not writing?
When I’m not writing or generally earning a living, I enjoy exploring heritage buildings especially anything vaguely abandoned looking. You can catch up on some of my urban exploration at the Abandoned Australia Facebook and Instagram pages. I also enjoy spending a lot of time with my family and going out to dinner, concerts, walks, drives and travelling.
And reading. I’m currently making my way through Ann Cleeves’ long list of novels, Isobel Blackthorn’s, the Drago Tree, and The Last Witchfinder by James K Morrow. And I’m patiently waiting for Camilla Lackberg’s next novel as well as Book Two of Altaica by Tracy M Joyce…..(Ha ha, I think Patricia is giving me a hint 😉  )
Click below for a Preview of A Single Light.

Availability
Ask for A Single Light at your favourite bookstore or library, and encourage them to order it in. Otherwise, A Single Light is available online from Odyssey Books, Amazon, Kobo, and Book Depository or look out for Odyssey Books at SupaNova and Book Expo Australia. Like my Facebook page for updates of where I’ll be doing a little personal selling as well. I have a tendency to occasionally show up at weekend markets around the Sutherland Shire.