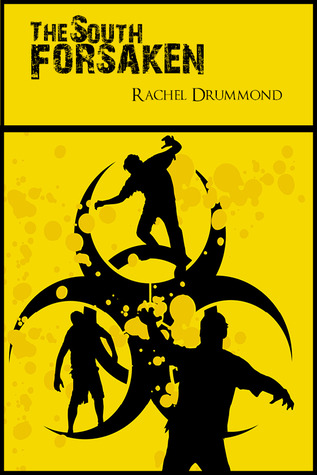 A book about the zombie apocalypse set in Australia?  With zombie central beginning in Geelong?  How could I not read this!
For those of you non Australian readers – Geelong is a regional city not too far from Melbourne that is the butt of numerous jokes along socio-economic lines.  (Too cryptic – think about it, you’ll figure it out.)
The South Forsaken by Rachel Drummond centres around Sarah, a nurse, her friends, family and a disparate group of strangers they meet in their various battles for survival. Sarah and her brother are horror film addicts – particularly, it seems, zombie films; so much so that Sarah has her “bug-out” kit stashed in the boot of her car.  I’m not sure how many novels deal with zombie movie fans who have thought through their escape plans and have their emergency bag stowed in their car, but I found this a nice touch to the story.  The drama unfolds when a research worker becomes contaminated with an experimental virus and goes home and infects his son. The ambulance comes…they both get hospitalised…you know the drill.
All this commences on the day after Christmas – Boxing Day.  Most people are either out enjoying the holidays or shopping at the post-Christmas sales.  Lots of people out and about, lots of zombie munchies…
So there is our recipe for disaster and it’s a good set up.  Drummond is a nurse and her use of technical terms lends itself well to the set up of this story.  However, there is no logical story progression from patient zero to mass zombies.  We hear of two infected patients in the hospital and next we have panic on the streets and zombies popping up everywhere.  This sequence needed just a little more thought.

This is an action packed adventure and moves at a fast pace.  Some of the initial action sequences lacked tension. They were a technically and clinically accurate telling of events without what I call related atmospherics – there was little to make me feel the scenes i.e. the fear etc.  (There were also a couple of minor continuity errors in the first half.)
However, as the story progressed, Drummond hit her straps and the action sequences and writing in general improved dramatically.  I went from merely thinking the story was ok to being really engaged by it and her characters.  I finished the novel with the thought – “Blast! Now I have to wait for the next one!”
I really did enjoy The South Forsaken.
Would I buy and read the next one?  Yes, because I genuinely want to know what Drummond has planned for her characters and based on the latter half of the book I think the next one will be a cracker.