Book Review – Under The Empyrean Sky

Under the Empyrean Sky by Chuck Wendig 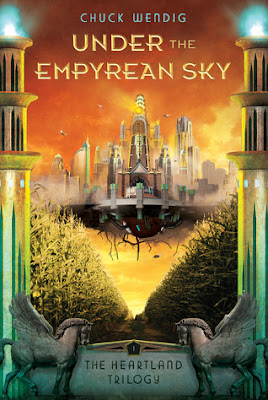 Under the Empyrean Sky is dystopian sci-fi which transports the reader effortlessly into its world and carries them along in a fast paced story with just about everything you could want.

Within the first two pages, the reader immediately knows what is at stake for the main character, Cael, and gets a good glimpse of the broader political and social constructs of this world – brilliant. (I wish I read more books that did this so quickly and so well.)
Cael McAvoy lives in the Heartland and the only crop the government allows the people to grow is a genetically modified strain of corn.  This corn is aggressive, wiping out other species and even trying to trap and consume people within its fields. It is also inedible.

Heartland’s citizens are malnourished and suffering from different forms of cancer. Cael and his friends are scavengers sailing their ship above the corn looking for anything of value to supplement their families’ incomes.  Meanwhile, the Empryean elite live in opulent sky flotillas.   The government brutally suppresses all rebellion and controls almost all aspects of the lives of those in the Heartland.

Cael is sick of the injustices of his life…

Ok, so you know how this goes – our hero is going to become involved in a rebellion.

Despite the fact that at its heart this is an age old tale, Wendig executes it brilliantly and the reader is left wanting to read more.   There were no surprises for me in this book, yet I loved every minute of it.