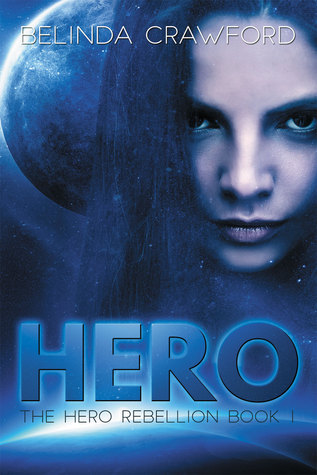 Hero is a the debut novel of Australian author Belinda Crawford.  Crawford has created a fast paced science fiction story, set in a unique world that many adults and teens are going to love.

The novel is set on the planet Jorn.  Humans have colonised this planet only to discover that a pollen on the planet is toxic to them.  The human population survives in cloud cities.
Hero Regan is a young girl who is “special” – a title that she loathes. She hears voices and has been treated all her life as if she were mentally ill and in need of medicating.  Her mother keeps her away from the public and locked up on their estate with a bevy of minders.
As a young teen, Hero objects strenuously to this and does everything in her power to make the lives of her minders miserable and escape. It helps that she is a bit of technological genius and can hack into their equivalent of computers with ease.

When Hero finally convinces her mother to send her to school in Cumulus City, the real fun begins.  She’s not been taking her meds, the voices she hears return with a vengeance and soon her odd behaviour makes her the brunt of bullies and brings her to the attention of some very dangerous people.  Running for her life, Hero learns that she is part of an age old conspiracy begun by the founding colonists…
But I’m not going to give you spoilers!  You’ll have to read it…
In creating Hero, Crawford has tapped into a genuine teen voice.  Hero’s character, her attitudes, comments and actions make her seem real and this is one of the things that immediately stuck me about the book.  You’re not always going to like her and she has a lot to learn as the book progresses, but that’s part of making an interesting character.
Another of my favourite elements in Crawford’s novel is that of the companion / guardian animals.  The settlers have genetically modified a lot of the flora and fauna to aid their survival and the children each have their own animal companion.  Hero’s is a 600kg ruc-pard named Fink.  Fink is perfect – alternating between consoling friend and ice cream eating buddy to deadly protector.  (I want a ruc-pard!)
Animals with such roles are something that appear repeatedly in fantasy novels and I think that dedicated fantasy fans will actually enjoy Hero even though it’s science fiction. On that note, I wouldn’t rate this as “hard” science fiction.  Crawford has made up a series of names and terminology, that I think most readers will find understandable rather than a barrier to reading. (Although having said that I do watch a lot of science fiction, rather than read it, so maybe my judgement is affected by this.)
Crawford’s writing is a perfect balance of description and action and the story set up is relatively quick and rollicks along once it gets going.  You are not going to fall asleep during long, lush, descriptive paragraphs waxing lyrical about the world she has made.  There is enough scene setting, description and atmospherics in her writing for the reader to clearly visualise the place as if it were a movie playing before them.  The action sequences – from illegal races with their companion animals, running from one group of peopel who want to kill her to another who want to capture her, to shoot outs, police chases, a AI bent on either helping them or destroying them and explosions throughout – place you right in the moment and race along holding you in the grip of this story right to the end.
The plot is not overly complicated. Thematically it deals with several deeper issues, beginning a teen’s need to experience the world, grow and make mistakes and learn on their own, the way we treat those who are designated mentally ill, the morality of a few individuals deciding the future of an entire race – individual freedoms vs the greater good.
The plot does twist and turn a little as the story progresses and leaves the reader with a final twist at the end leading on to the next book.
I’m pretty sure the wait for the next book will be worth it!