Know Your Enemy by Tasman Anderson 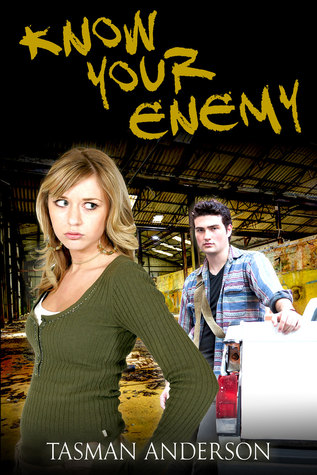 This could be a hit with teens.  It has everything – action, adventure, high crime, the mob, a brooding bad boy, an intelligent (somewhat naive) heroine, a bunch of high school kids who have no idea what they’re in for.  It’s a recipe for madness – teens will probably think the best kind of madness.
I usually only read YA books that are epic, urban or paranormal fantasy, so reviewing this was a bit outside my comfort zone.  It’s set in the present day in what is meant to be a dead end town.  I really wasn’t sure if I’d like it, but by the end I found I enjoyed it and I can categorically say that most teen readers will love it.
The novel centres around Nicole who is finishing High School and dreaming of studying journalism at Murdoch University.  She is the smart girl – the good girl. Yet through a series of stupid choices, in order to fit in, winds up involved in criminal activities, which have dire consequences. Her life is irrevocably altered.
Anderson’s writing has a hint of Aussie vernacular but not so much that it won’t appeal internationally.  She has created a unique teen voice within Know Your Enemy.  I found the dialogue and character creation to be realistic, so much so that at times I found myself almost yelling at main character as I read- “Don’t be an idiot.” (This had about as much effect as saying the same thing to my teen nieces – nada.)
The set up for the major events is relatively quick, which is good. However,  I did initially find Nicole’s foray into crime to be a little too puerile for her age, but perhaps it’s appropriate given her character at this point has never done a thing wrong and this is her first attempt at being “badass.” The love interest in the novel is the mysterious Aiden.  I did think his character could have been developed a little more and a tiny more back history between Nic and Aiden woven in.
What I did like is that the bad boy isn’t “transformed” by Nic’s love into a shining hero. He has his own twisted sense of morality and remains largely unrepentant for his actions.  Bravo to Anderson for not succumbing to the usual tripe of bad boy turns good.  (There are some good life lessons here – poor choices, lives altered irrevocably and “No, you won’t change him – leopards don’t change their spots, fall for the bad dude and you’ve got to be prepared for the consequences”– sheesh I’m feeling old!)
Once you reach the car stealing sections of the book the pace ramps up and things go from bad to worse very quickly. (They still made poor choices and I still yelled at them though.)  This action packed section won me over. The ending was a little anti-climactic for me, but it does leave the story line open for another adventure.
You can tell by reading this that I became quite involved with the characters, despite the fact that the story wasn’t what I would usually choose.  That is a testament to Anderson’s writing and characters.  Sometimes the teen “voice” was just too real for me.
I think tween and YA teen readers are going to thoroughly enjoy this book.
Four stars.