Patricia Leslie is an Australian author from Sydney.

Her debut novel The Ouroborus Key has been described as a “hidden gem” and a blend of “mystery, fantasy and religious myth.”

Please tell us a little about yourself
Basically, I’m a daydreamer. The problem with dreams is their tangibility, so I decided to start writing so I could hold on to them a little longer. This way I get to keep the best of both worlds – dream to my heart’s content and give those dreams life in the pages of books that I hope other daydreamers will relate to. My interests are varied and range from feminism and women’s history to history in general, mythology, travelling around, taking photos, reading, and sharing life and stories with my family and friends.

What types of books did you enjoy reading when you were young?
Pretty much the same genres as now – fantasy, crime, and historical fiction and non fiction. Books and series I read were Lord of the Rings, Mary Stewart’s The Crystal Cave, Marion Zimmer Bradley, Thornbirds, anything by Stephen King though The Stand, The Dead Zone, Firestarter and The Dark Tower are absolute favourites, Thomas Covenant and the Belgariad – just to name the few I can remember. I have always been an avid reader.

Had you always wanted to be a writer?
Yes. Creative writing was my favourite part of school and expression of self through writing has always been my release whether it was stories, bad poetry, articles, book reviews or research notes.


“The Ouroboros Key is more than just the title of this novel; it is the centre of it. A myth-riddled ring passed down from the time of Adam and Eve, the ring epitomises the book – a blend of mystery, fantasy and religious myth.”
Jenna, Goodreads. 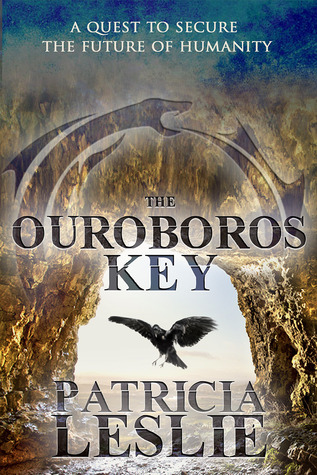 Please tell us about The Ouroboros Key
This is a quest adventure/urban fantasy tale about a group of friends who, while supporting one of their number, find themselves involved in mysterious, supernatural occurrences. There is a car chase, attacks, a murder or two, people vanishing, a trek under the mountains, and several magical incidents. Along the way, our brave questors discover that the world is more than the reality they’ve always lived in and that the door between mundane life and “real life” is opening.

At times it seems to follow a Dan Brownish bent, in that it looks at the conspiracy of truth around early Christianity (that is the bloodline of Christ) – however, where The Da Vinci Code dives into clues and modern day conspiracy, The Ouroboros Key centres on magic, myth, and fantasy. The magical beings in this story are derived from Sumer and are a mix of Sidhe, Annunaki, and very early Christian myth.


What inspired this story?
I started this story a long long time ago. It’s a melding of my favourite aspects of history and mythology and set in some of my favourite areas of the USA. It was originally going to be set in Australia however I needed really big mountains and wanted a real Snake River (Little Snake River winds through the Rockies along the border of Wyoming and Colorado). I was already doing the research for this when I found the germ of a story idea that linked everything I was reading about (it was something I read about all cave systems being potentially linked).

How much research did you have to do for this novel?

Heaps. Beside the historical research there was also a lot of geographic research (including a 3-week road trip to New Mexico and Colorado) and character research. Each of the main characters has a family history going back three generations. For instance, Dan’s mother, Meg has almost enough back story to warrant her own tales of adventure, Finn Shaw and Simone Lang first met during a case Simone was working on at Finn’s university (he’s an historian and expert on historical books and bookbinding), Irene Flemming spent her life exploring the world for artefacts that gave meaning to human history, and so on.

Is mythology an area that you’ve always been fascinated with?
I’ve always have been fascinated by mythology and the way it intertwines with the real world. What is mythology really but someone else’s religious beliefs? If you read enough you find that a lot of the stories are similar across a broad section of belief systems from around the world. And then there’s the cultural approbation and exchange that occurs over time as cultural dominance of one race over others grows and wanes. Besides that I’ve always wanted to have magic powers and fly….

I believe you have another book coming out later this year, can you tell us a little about that?
Yes I do. It’s working title is A Single Light and it is another urban fantasy, not related to The Ouroboros Key and this time set in Australia. In fact, south of Sydney. Again, it toys with the whole “we are not alone or as dominant as we think we are” theme. This time, the evil is present and growing and likely to take over the world. However, evil and good are two sides of the same coin, and it is not at all hopeless. I like to work with ensembles and to have characters working together to protect and support each other, and it will be the same in this new story. There’s no quest as such, just a mission to stop the death and destruction.

What are you currently working on?
I’m currently working on a another story set in Sydney which may involve some time travel to the mid/late 1800s. I’m setting the scene now with characters emigrating to Port Jackson from the Isle of Skye. Strong female characters will dominate in this story with a family history that threads its way through the history of Sydney bringing past and future together in one climactic incident.

Do you have a writing routine?
Not so you’d notice. I write when I can and carry my Ipad and/or a notebook and pen around so that prolonged periods of waiting (usually on trains or planes) can be converted to valuable writing time. I have notes everywhere!


How do you juggle working full time, allowing time for the marketing we need to do as writers and writing?
My goal is to allocate early morning hours about 3 days per week to fiction writing. It has to be early as 1. there are less distractions, 2. it’s quiet and 3. writing at night keeps me awake. Unfortunately, life often gets in the way, but I’m determined! Re the marketing, I have this organised quite well. I head off to work early and spend 30 minutes in a cafe with coffee and my Ipad, and work on maintaining my author platform. Ongoing, I share links to writing related articles and news, which feed into an online journal I produce. This can be labour intensive but keeps me active on Twitter. If you’re not active nobody knows about you. I also write blog posts, scroll through LinkedIn and Facebook, answer emails, and do some online research. I follow up at night when I’m resting in front of the television. A couple of nights a week I will also update my website, work on graphics for bookmarks, posters and postcards, and write articles etc. If it’s a really quiet night (that is everyone else has gone out and it’s just me and my dog) I’ll devote some time to fiction.