Summoner, Book One – The Novice

** I was provided an ARC copy in exchange for an honest review.** 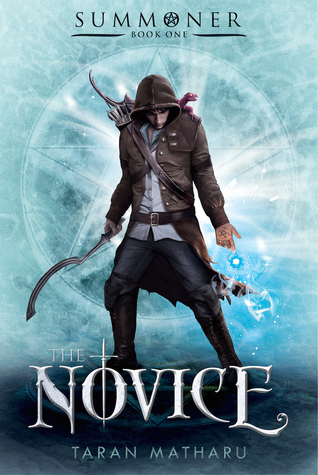 Matharu’s book has a HUGE following on Wattpad. (It had over 3 million reads in 6 months. At present it has over 6.5million reads and 181k votes – Wattpadders aren’t stupid!) It was also recommended to me by a fellow author, whose judgement I trust.
However, when I began to read about orcs, elves and dwarves I did wonder what I’d let myself in for.  You see, I have deliberately steered clear of epic fantasy of this nature for many years.
Our young hero, Fletcher, is an orphan raised in a remote area by the village smithy.  He has a hard life, is victimised by the bullying son of the town’s wealthiest and most powerful resident.  (Minor Spoiler) One market day he makes friends with an old war veteran and comes into possession of the diary of a battle mage, who was researching orc summoning magic.  You know what will happen next – Fletcher reads the book and summons a rare demon.  Here starts our adventure.
The Novice is very derivative of the classics of epic fantasy that have gone before it, yet it is also very well written.  In an interview with Teen librarian Matharu talked about a love of history and mythology, but said:  “I also used my favourite fantasy tropes in the creation of the Summoner world. These included the magical schools of Earthsea, Harry Potter and Discworld, the multiple races of Lord of the Rings, Skyrim and Redwall, the portals to another world in the Chronicles of Narnia and Stargate, and even the creature companions in Pokémon.”
Combining all these influences in one, means Matharu has put his own twists into the genre. In the novel we also find firearms as well as bows, a variety of bladed weapons (I particularly like the use of the kopesh) and his blend of demonology has subtle differences to it from other novels I’ve read.
Within the first page you realise that Matharu knows his craft. The narrative is well constructed: there is a perfect balance between scene setting / description and action so the pacing is excellent – it romps along.  All the way through the story was absolutely easy to visualise – something I love.
A couple of things that struck me as awkward were the fact that the orcs are said to be ruled by a large albino orc and the use of the Pinkertons as a corrupt constabulary.  This obvious lack of originality was jarring.
The character construction is good.  Fletcher and his friends are multi-dimensional, likeable and relatable.  The bad guys, at this stage, are more one dimensional but this is a series and we’re bound find out more about them as time progresses.
I particularly liked the political intrigue, racial tension and class tensions that existed within Matharu’s world.  These added an extra layer of realism and were a nice touch in his world building.
I can see this book being loved across a wide age bracket.  I would say advanced MG readers through to adults.
Matharu gives you what is tried and true with some new twists in one very well constructed book.  It’s a rollicking adventure for all ages, with characters you will come love.
Four Stars!