Well, Supanova Sydney is happening this weekend June 19-21, 2015, which should be great fun.  (Tracy waves her hands about madly and does a happy dance around her desk.)
One of the best things about Supanova is the Cosplayers.  They really add to the unique atmosphere and I love the huge effort many of them go to in creating their costumes. The Odyssey Books gang had a blast at Melbourne Supanova, but this time we’re really getting into the spirit of things!

At the suggestion of Vacen Taylor, several Odyssey authors and our publisher – Michelle Lovi, and her intrepid intern – Jen, are going in costume.  We’re all pretty excited – Michelle, our publisher, particularly so since she’s a huge Nathan Fillion fan and he’ll be there. (Can’t say I blame her…)
“Let’s go to Sydney in costume as our book characters,” said Vacen.
“Easy,” said Tracy.  “No problem.  Isaura, the heroine in Altaica, is an archer. I’m an archer. I’ll just get a costume and bring my archery gear.” 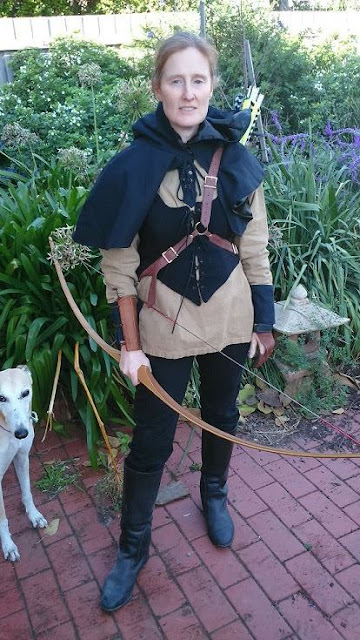 So the clothes were pretty easy. Here’s the costume with a real
longbow –easy… 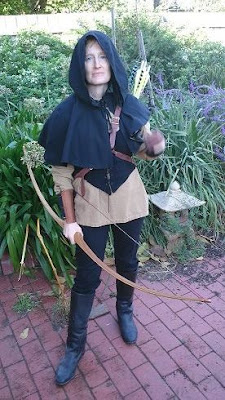 Problem – Of course you can’t take real weapons into Supanova.
Consensus was that the costume worked best with the bow – so I had a go at making a prop bow from stuff I literally had in the backyard. (I had all sorts of “better” ideas involving making one from timber strapping etc, but I discounted them as I needed the bow to break down into pieces for easier transportation / shipping)
I used a war bow as a (rough – really rough) guide. Just remember it’s a prop, and it will get some future refining.

This is my first go at something like this; it’s not brilliant but I think it will pass muster. The curvature of the limbs and tapering is a little off & the bowstring is huge (starter cord). But the piece of aluminium inside it can be shifted to alter the curve of the limbs. I tried to make it look like wood…
I’m actually rather pleased with the end result – that’s why I’m posting, but you’ve probably guessed that.
Here’s what I started with:  25mm irrigation pipe, a piece of aluminium window frame, masking tape, bamboo garden stakes. (Yep – stuff I had in the backyard!) 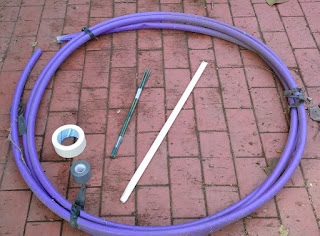 Step one:  Cut a suitable length of pipe, cut it in half, sliced the ends so I could taper and tape them, inserted pieces of bamboo to anchor string to later. Slid halves over the aluminium to join them.

Step two: I sprayed the funky purple plastic with a primer paint that was pretty much guaranteed to stick to anything.
Step three: Painted a couple of thick coats with a red-brown/ cedar coloured house paint. Hoping the brush strokes would later mimic wood grain.

Step four: Apply crackle finish, painting longitudinally.
Step five: Paint with Burnt Umber acrylic paint. (Pray)
Step Six: Paint a really beautiful artistic kind of Celtic design at the tips.  WRONG. My ambition far exceeded my artistic skill and then I couldn’t get the gold paint off, so I just sponged it on the tips. (It kind of makes the taped ends look like a feature – at least I tell myself that.)
Here it is.
From this to this.

And the wood finish?

So bring on Supanova!

I can’t wait to be in Sydney with Odyssey Books and chatting to people.  I’ll be armed with my camera and taking a heap of photos which I’ll put up on my Author Facebook page. https://www.facebook.com/TracyMJoyceAuthor

So if you’re in Sydney this weekend, drop by and say “Hi” at the Odyssey Books table and take a look at our books.

Odyssey authors, Patricia Leslie, Sue Parritt and myself will be there.


The following sci-fi & fantasy titles will be on sale there.  Check out the cool covers.
See ya!  (Only 3 days to go!!)